How does culture, location, and language affect UX and design? 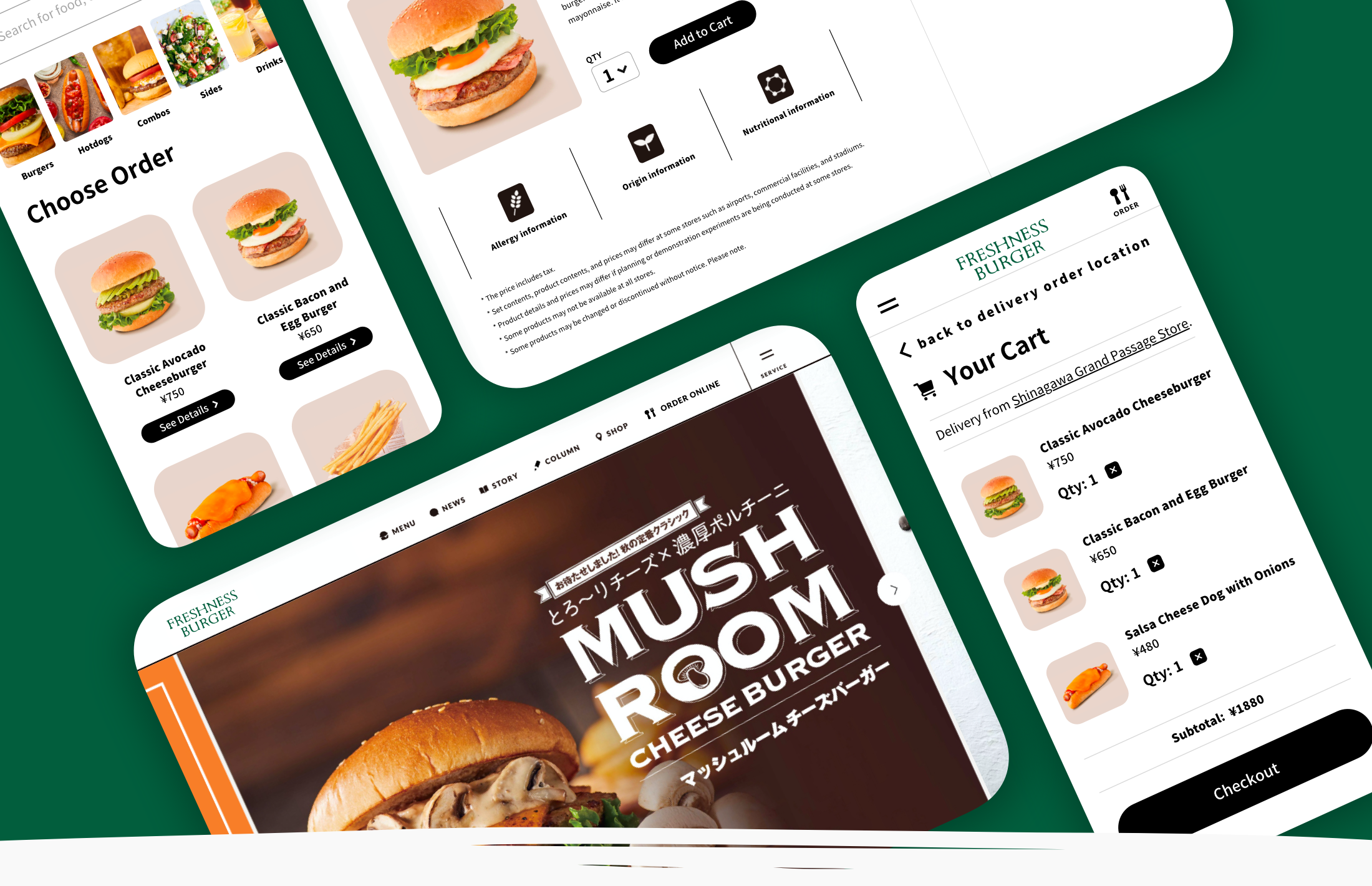 Freshness Burger is a Japanese fast food restaurant chain that sells hamburgers, hot dogs, soups, salads, and more. They have 189 restaurants in Japan. Some stores can be found on Uber Eats, and some locations offer delivery (via phone order) as well. Freshness Burger has a mobile app with discounts, but  there is no way for customers to order online through Freshness Burger’s site or app.

Team:
Self-directed with feedback from mentors and peers

Because this was a self-directed project, the user research I was going to need to do to answer all of my questions seemed daunting.
‍
As an American who’d recently moved to Japan, I’d noticed a lot of differences in Japanese websites that were unheard of or simply not done in the west. Some of these differences included things like mountains of text on web pages, page layouts that seemed unintuitive and outdated, and oftentimes a lack of ecommerce presence for businesses & retailers.
‍
I had so many unanswered questions, and felt so unsure and worried that Freshness Burger would even benefit from an online ordering system - as online ordering systems can be very expensive to maintain and sometimes aren’t profitable for restaurants.
‍
I definitely felt like I flailed a lot during my research phase. I wanted to make sure I covered all my bases and really understood Japanese culture and the food industry in Japan, so I spent more time than I probably should have doing research. 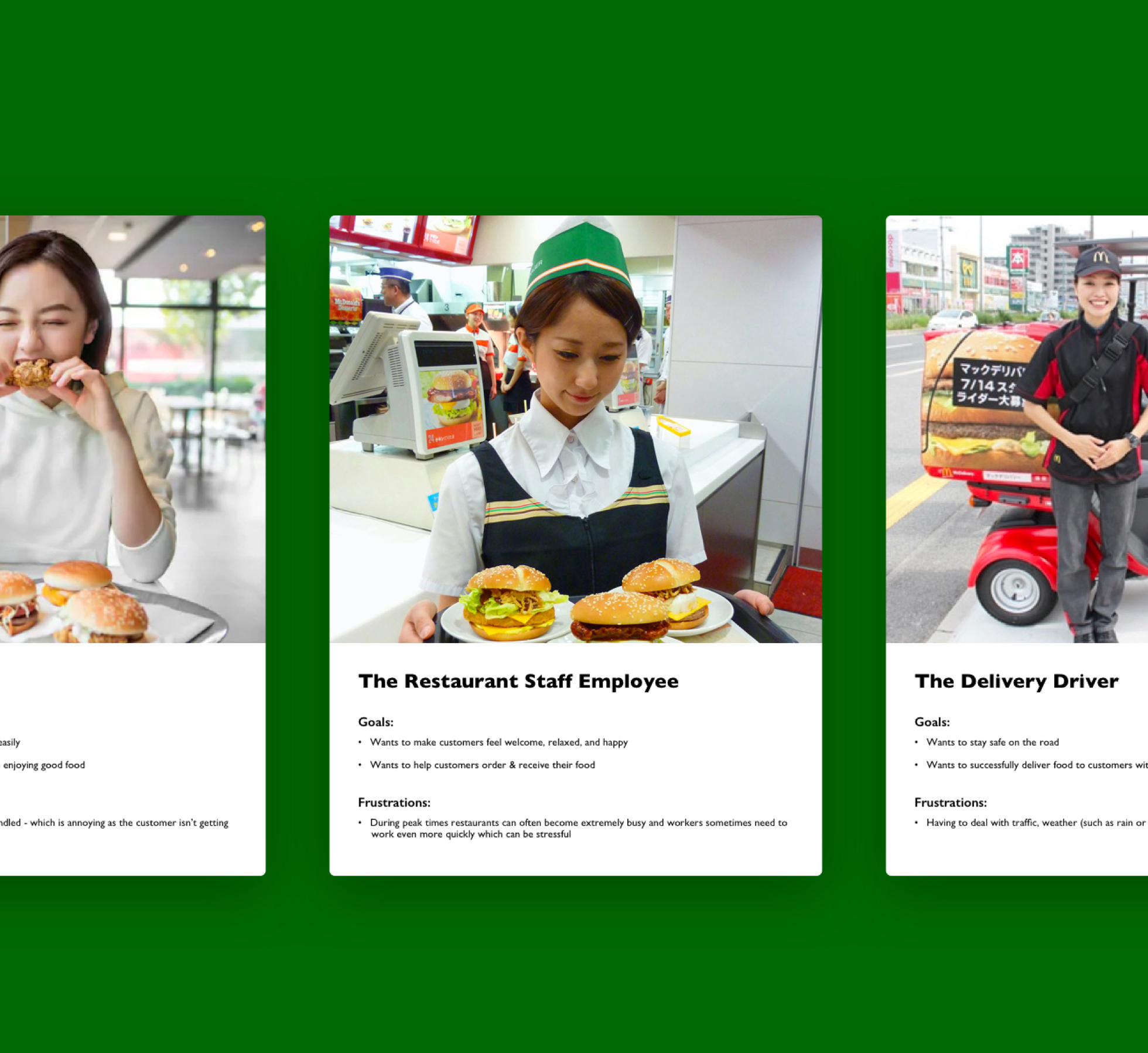 Above: A snippet from the provisional personas I created 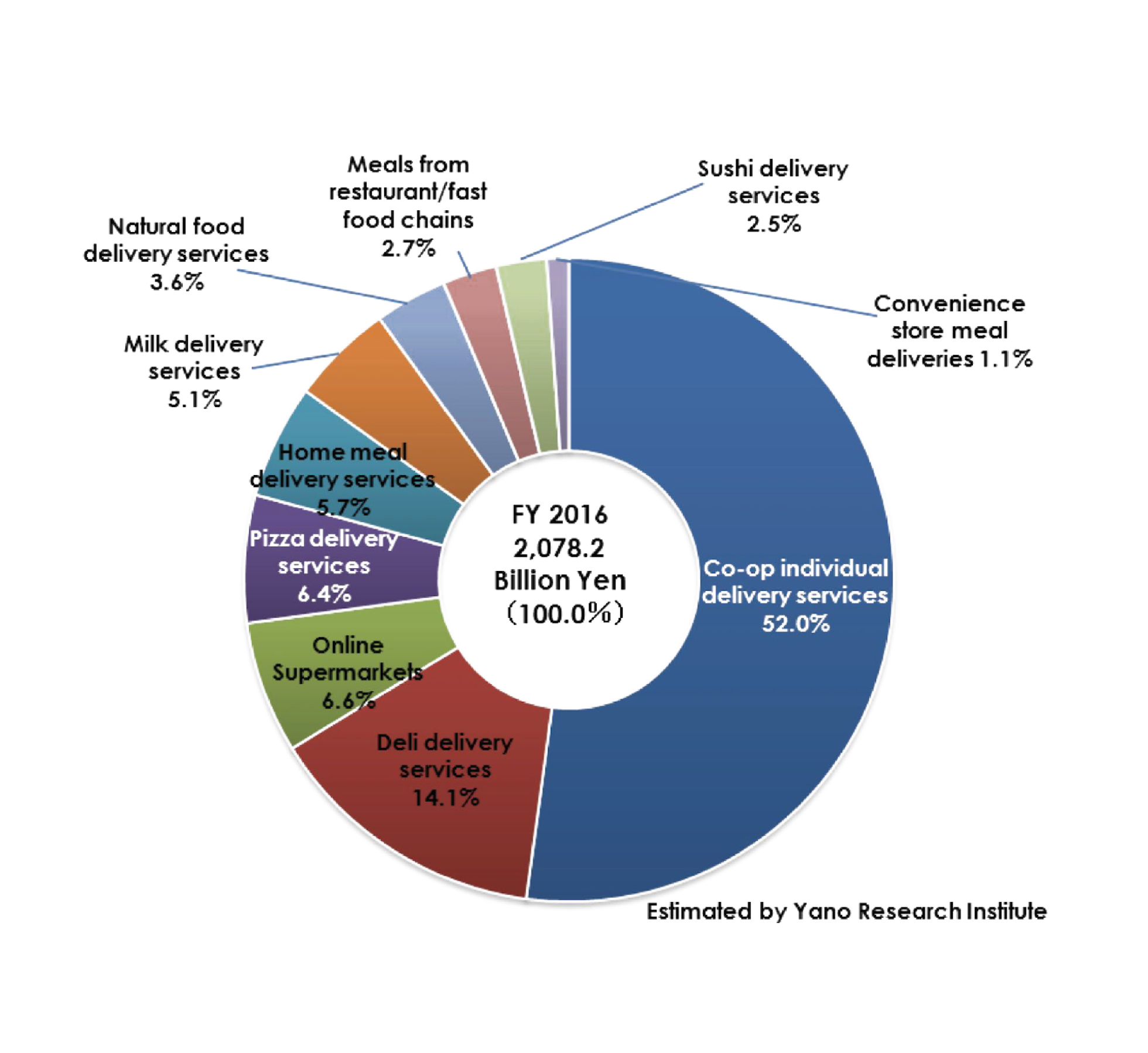 Above: A chart of Japan's food delivery service market by category 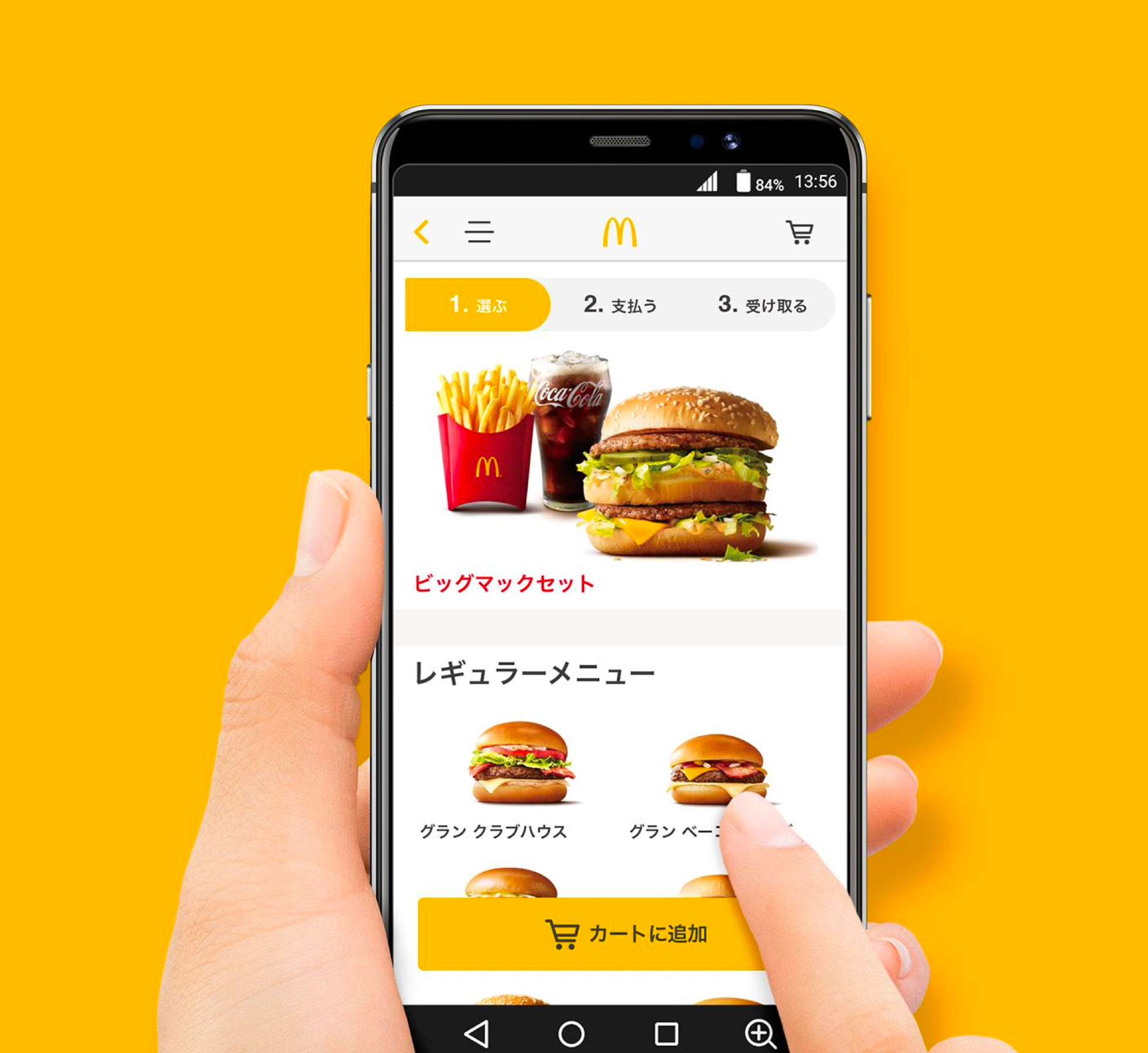 Even though I spent too much time on my research phase looking into Japanese culture & the food industry in Japan, I definitely learned a lot of useful information. Below are my key takeaways from my market & cultural research:

The reasons why online ordering is not as widespread / widely adopted in Japan is nuanced and includes a mixture of circumstance (such as living somewhere rural with few restaurants where ordering online isn’t even an option) and beliefs held by people living in Japan (such as the idea that takeout isn’t as fresh / delicious as in-store ordering).

Because of the cultural differences in how Japanese people think and approach using websites, website design in Japan is approached very differently than website design in America, and it will be important to design specifically for a Japanese audience, and not under the same assumptions / methods I would design for by default (which is usually for a Western audience).

How do people in Japan prefer to order their food? What factors are involved when ordering online in Japan? In order to learn more about peoples’ ordering habits and preferences, I create a Typeform survey. I also conducted 1:1 interviews as well with people currently living in Japan. The pain points I discovered are as followed:

Some Japanese websites are outdated, unintuitive, and slow to load, which can lead to a frustrating experience for users.

Lack of Trust Regarding Online Payments

There are quite a few people in Japan that are suspicious of making payments online and believe that it is unsafe / sketchy to do so.

Once I had gained more insight into Japanese culture, and beliefs and attitudes toward ordering online, I created a user persona; Taka Nakamura, whose frustrations and goals I would need to keep in mind later on in the process. 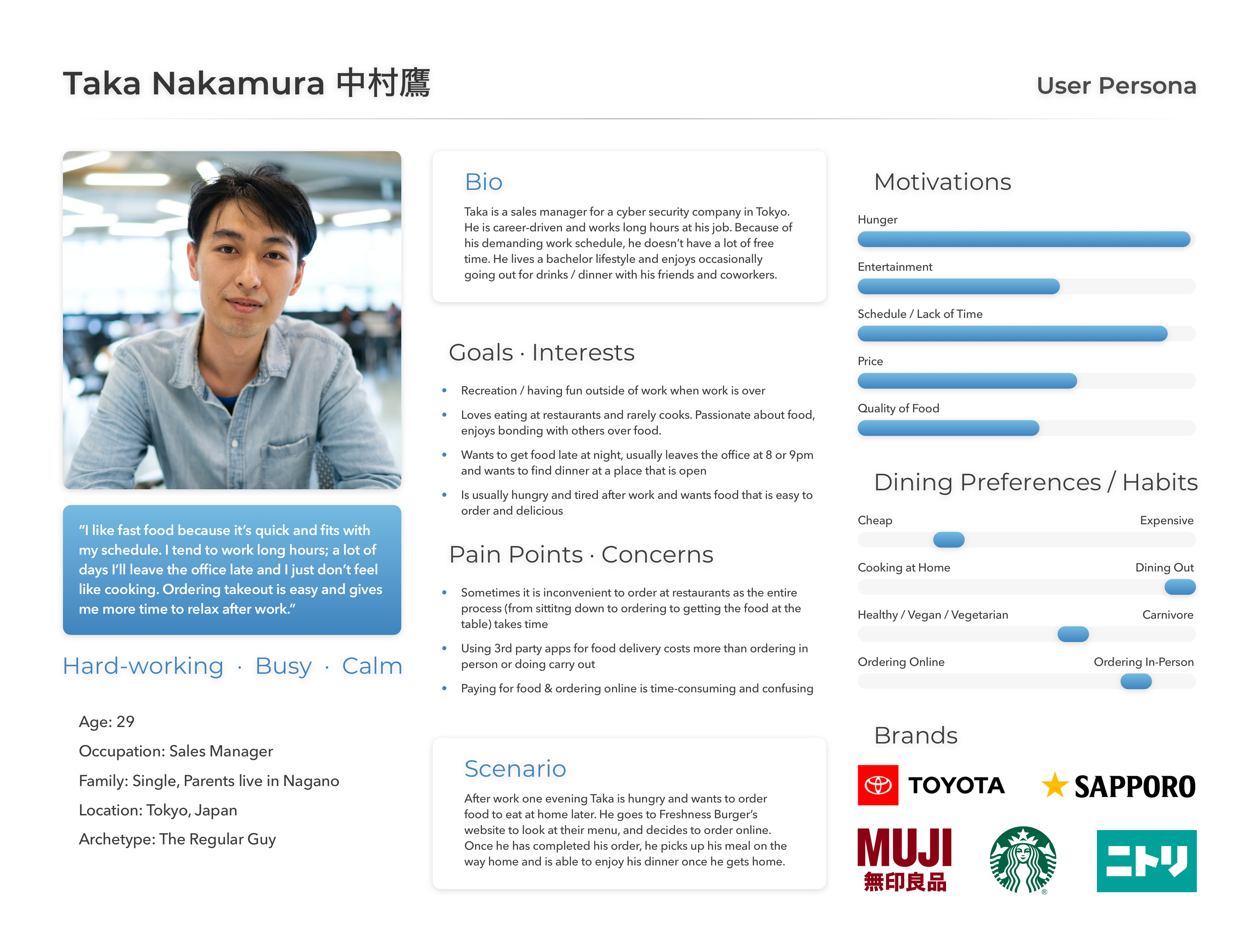 Mapping out the User’s Journey

With the research done and the users’ pain points understood, I decided to tackle how the online ordering system would be structured; and what sorts of decisions and choices they’d need to make along the way when ordering through Freshness Burger’s site.

Once I had a bit of the user’s online ordering joourney mapped out, it was time to get a rough idea of how things would be laid out. I decided to start sketching and exploring all of the different ideas I had for each of the different pages.

One thing I learned during my cultural analysis is that Japan is a mobile-first country when it comes to accessing the web. Years ago, it was expensive to create both mobile and desktop versions of a website, so Japanese companies chose between the twoand settled for what the majority of users were drawn to: mobile-friendly websites. Thus, companies optimized the Japanese UI design of their sites for mobile. Nowadays, more and more Japanes websites are finding it important to incorporate more fluidity between mobile and desktop because it targets more users to access their websites and also to become multi-platform compatible.
‍
Knowing that, I opted to take a more responsive approach for both desktop and mobile.

After sketching and wireframing, I incorporated Freshness Burger’s branding to all of the different UI elements. 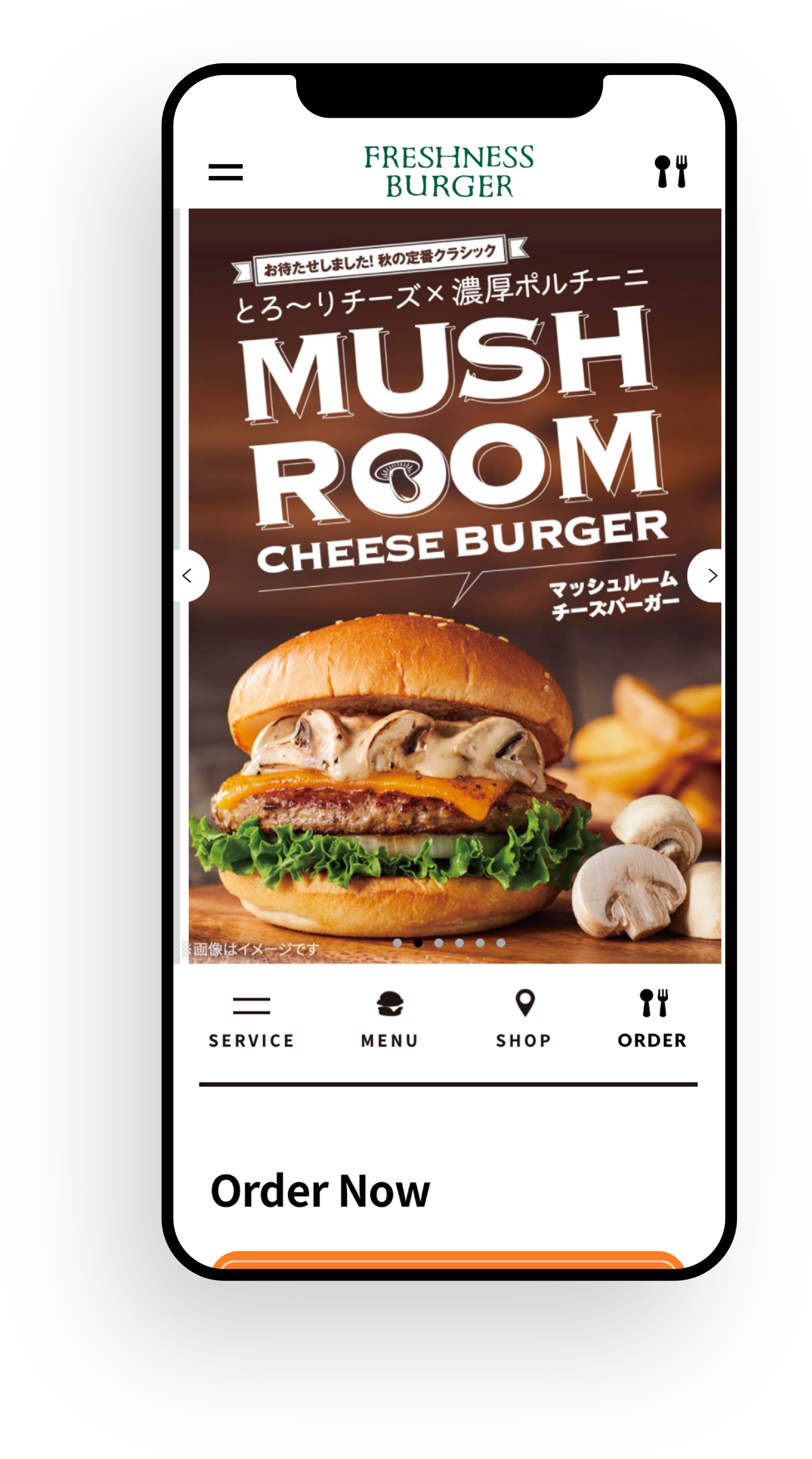 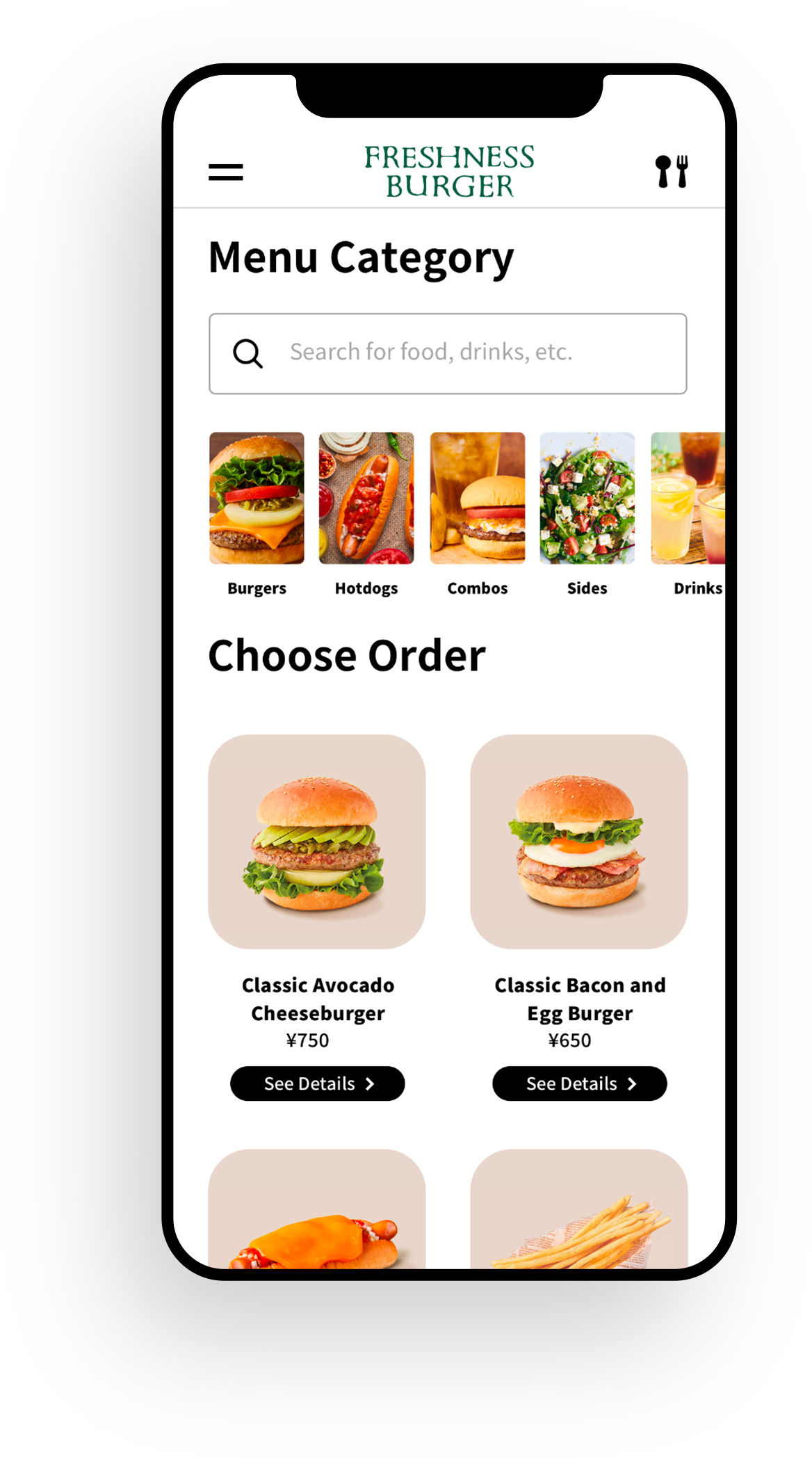 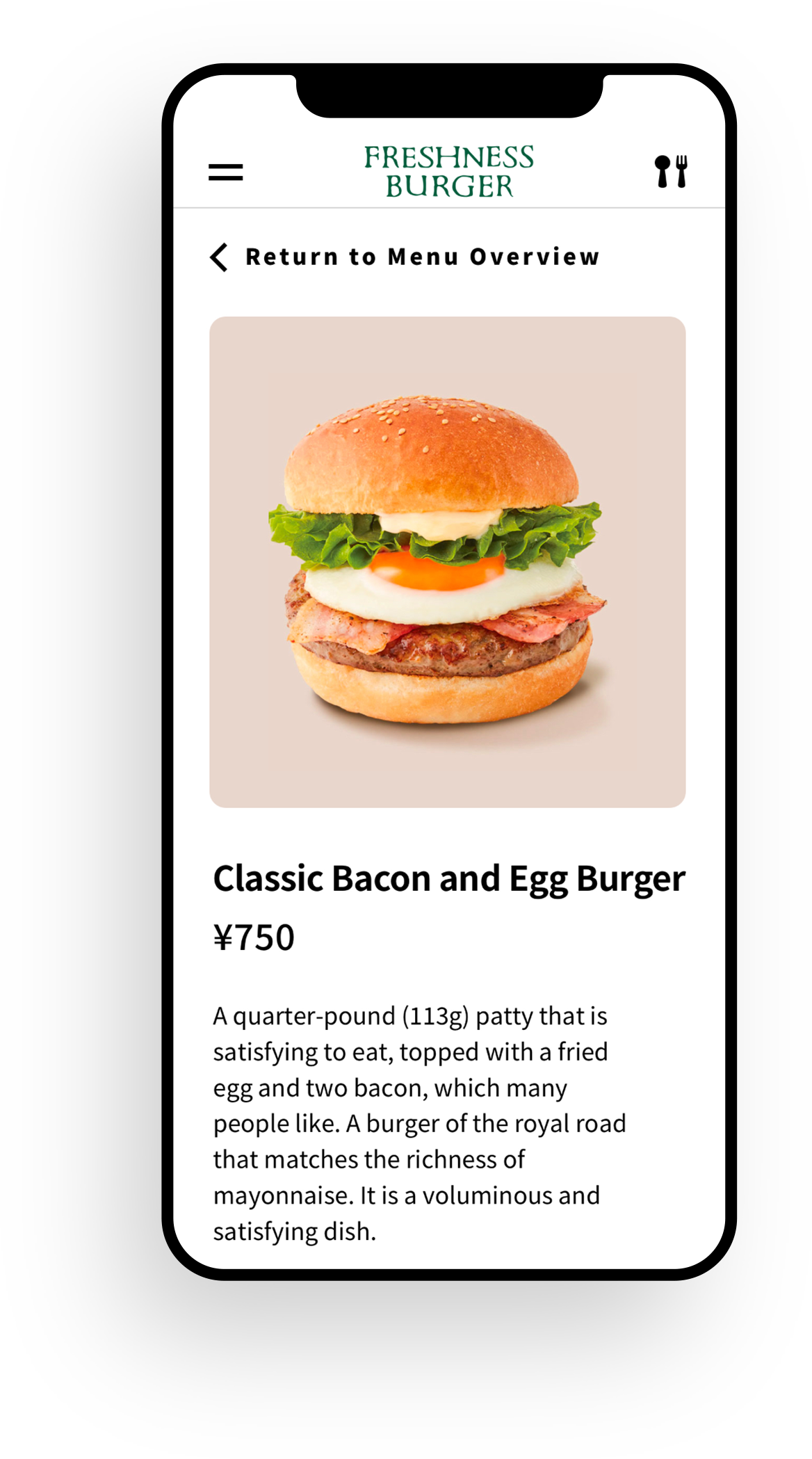 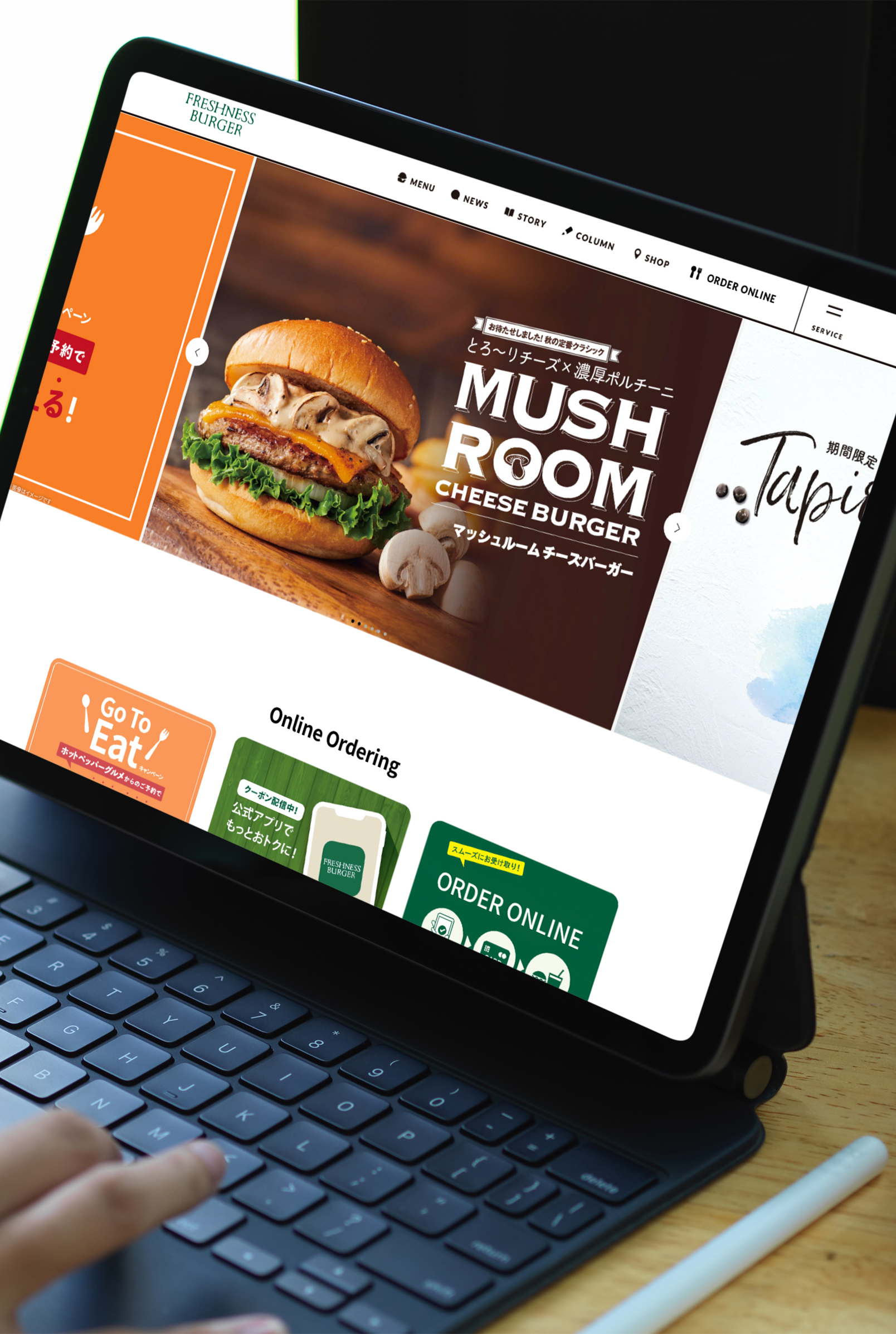 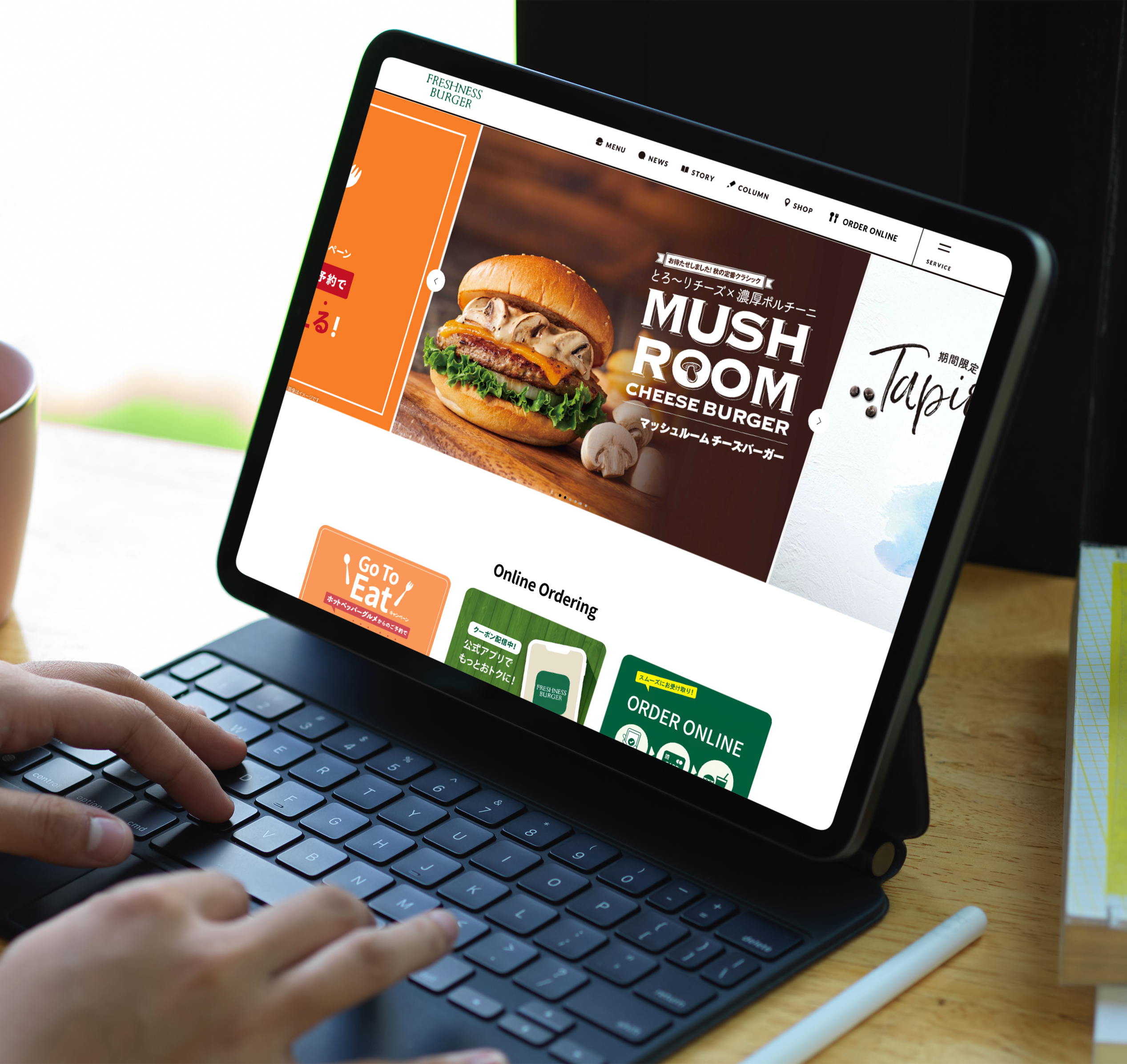 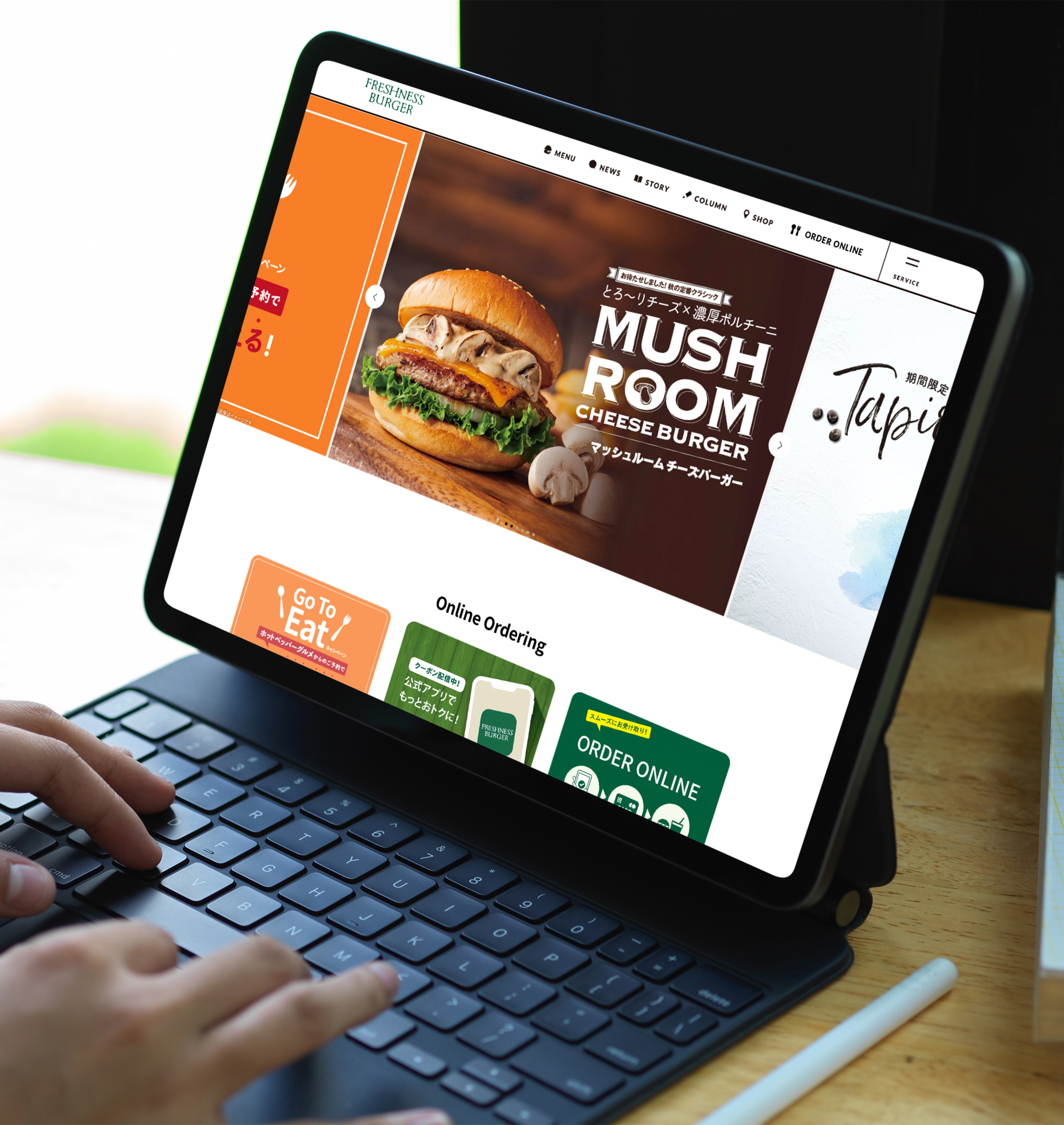 Once I finished the UI design, I decided to test the UI. It would be useful to be able to identify if there were any problem areas or things that were confusing to users.

I created these initial desktop and mobile prototypes using Invision. Then I ran usability tests with participants currently living in Japan, who were asked to complete 3 different scenarios, all of which were aimed at nagivating to the online ordering section of the site, and then completing an order.

Recording Feedback from the Usability Test

After the usability tests were finished, I took the feedback I received and organized it iinto an affinity map to help me better understand and categorize the things I’d reccorded and observed from different participants during the tests. 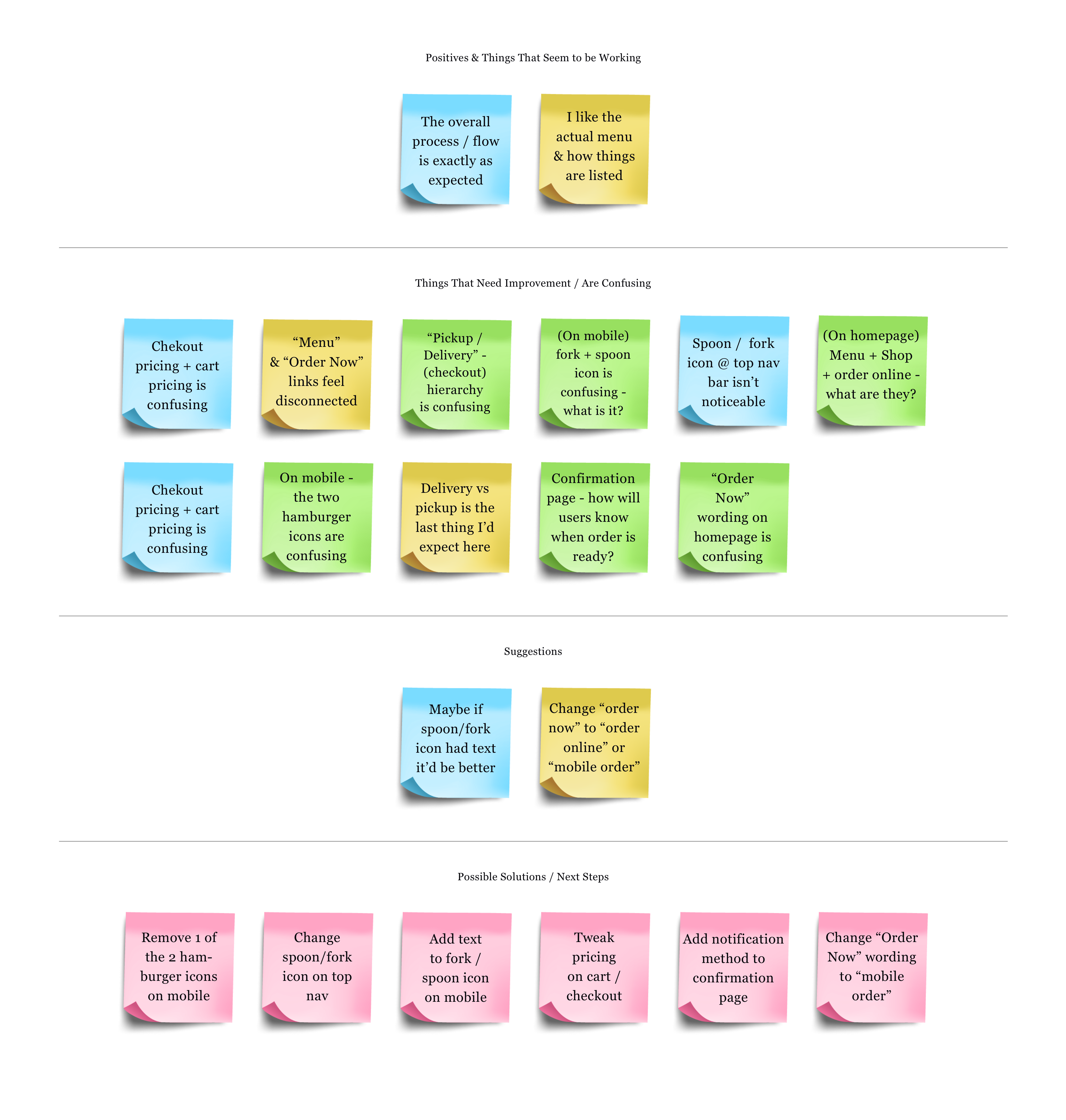 During the test, the majority of participants were confused by the fork and spoon icon in the upper right corner, which enables users to start the process of ordering. In order to help users better understand what that icon was for, I added a label underneath that said “order”. 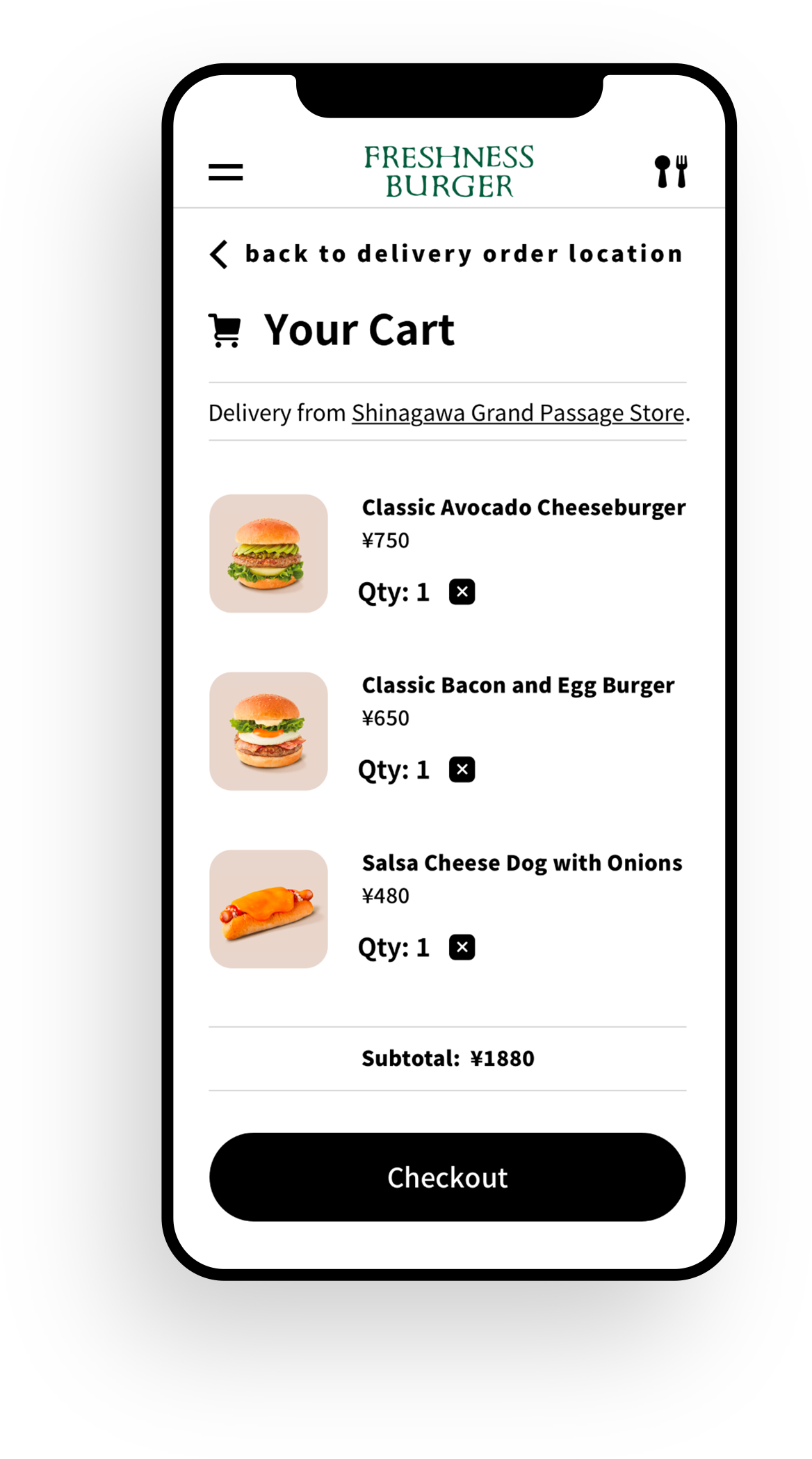 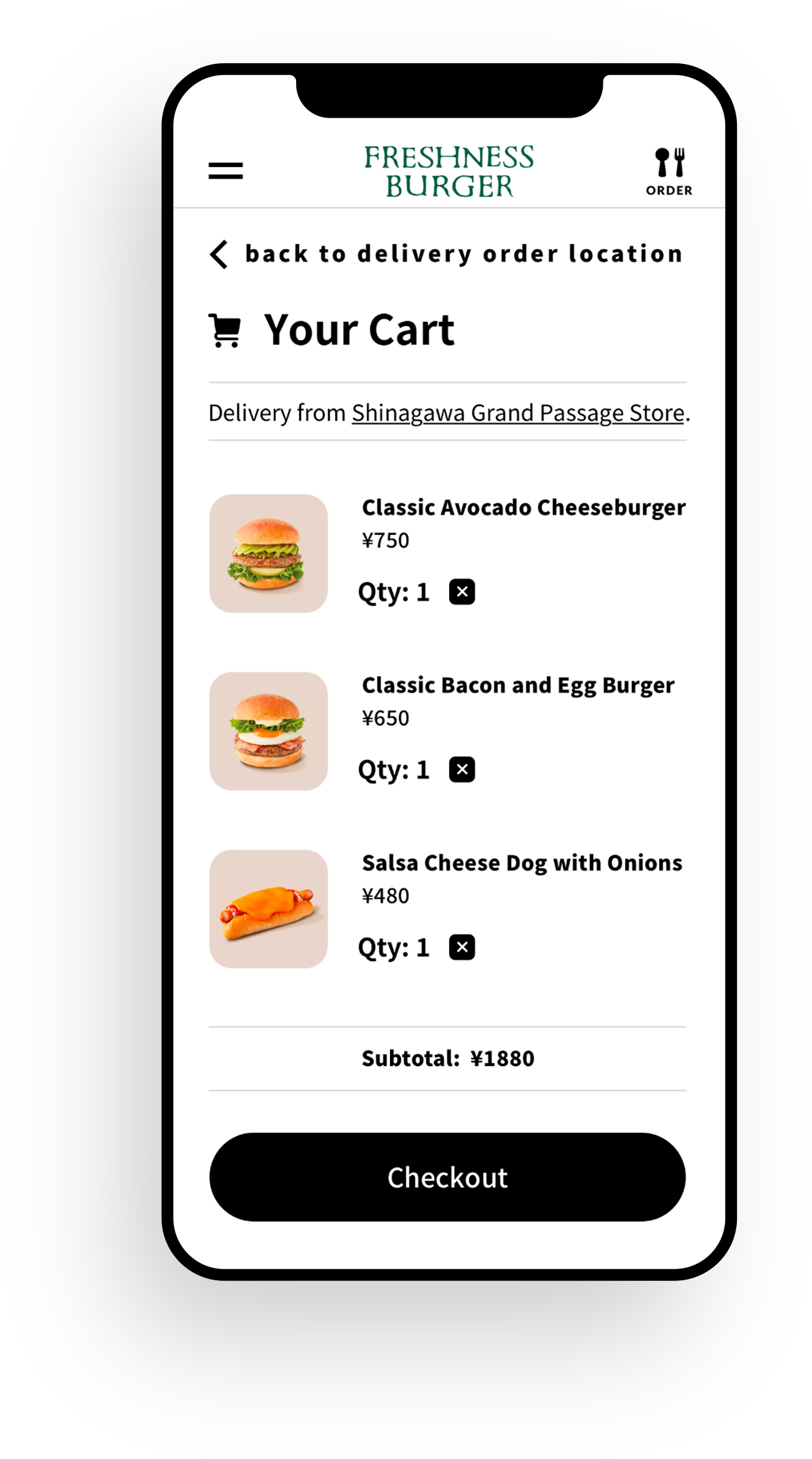 In the original prototype, another thing that confused participants was the pricing in the cart. There was no breakdown of the cost for things like sales tax or a delivery fee - which is something participants stated they like to know when ordering online. 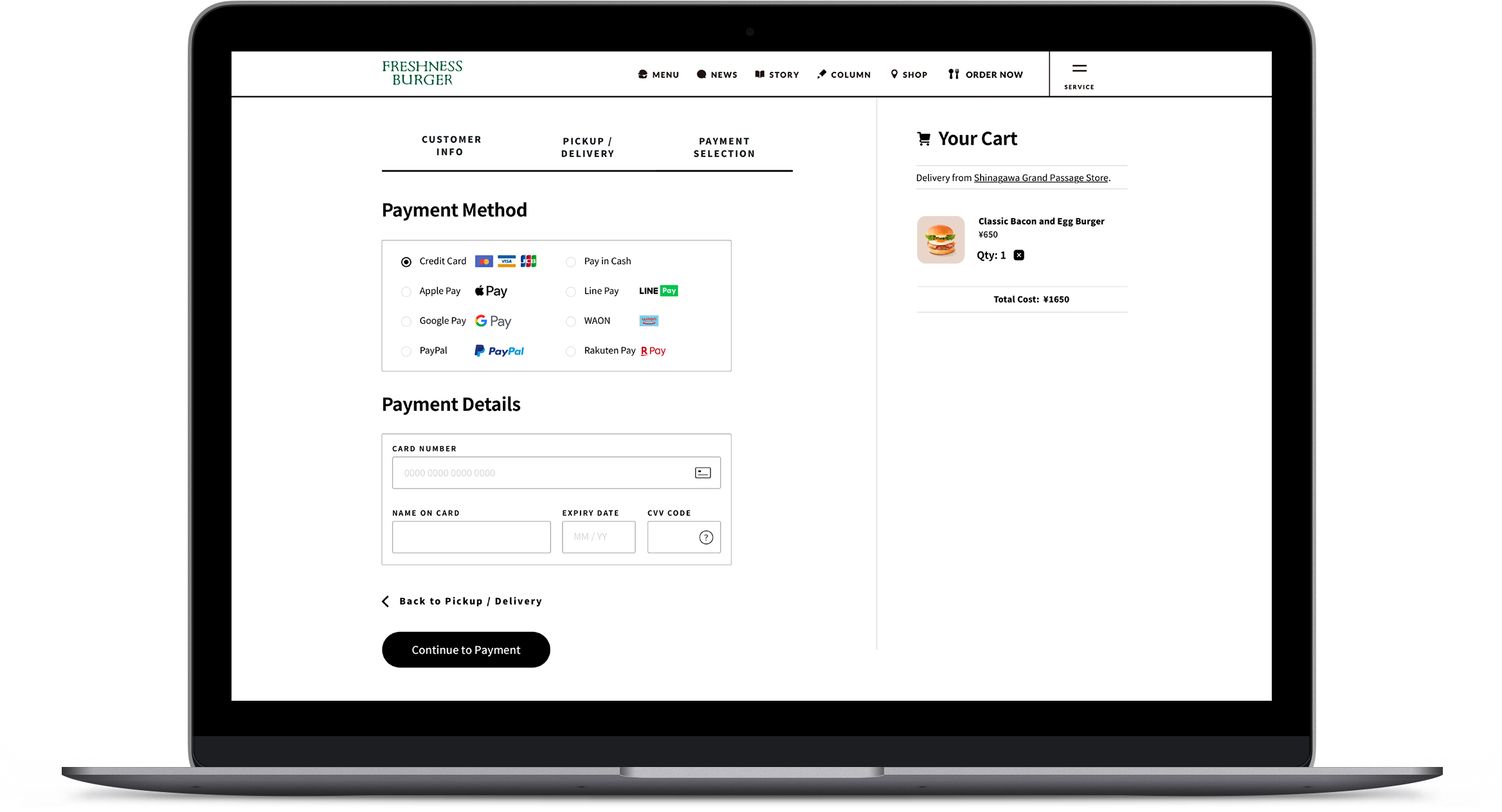 The Solution
‍
In order to bring clarity to the pricing in the shopping cart, I broke down the pricing into the categories: the subtotal, delivery fee (if the user was ordering delivery), and sales tax. That way, users would be able to better understand the final cost for their order. 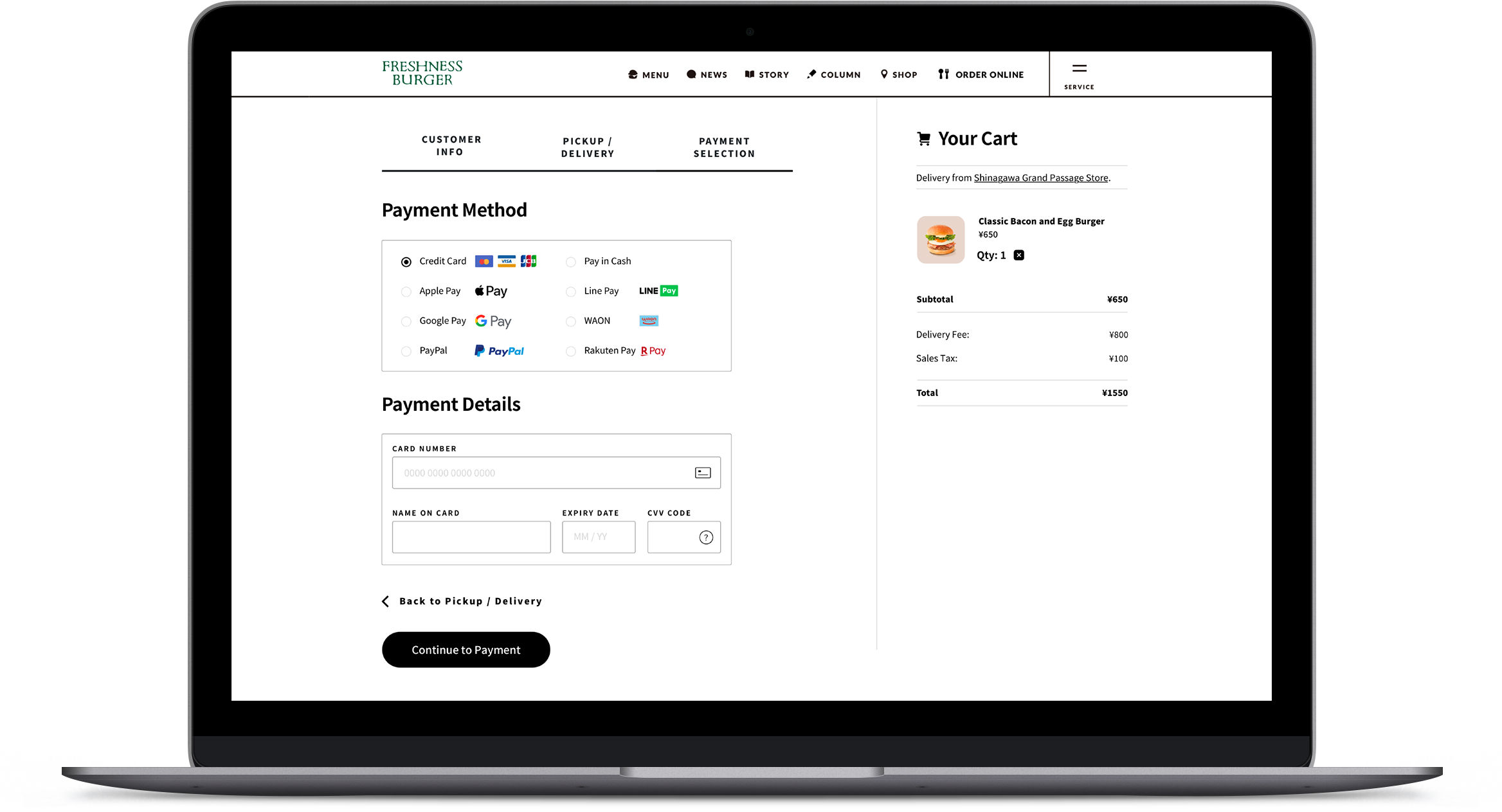 Creating a responsive online ordering system challenged me to explore many different research methodologies, especially as someone who isn’t familiar with Japanese culture or businesses inside of Japan and how they operate.
‍
It was really fun to learn about different beliefs and habits practiced by people of a different culture, and those beliefs and habits can greatly impact how businesses are run. Since many Japanese are suspicious of online ordering, there hasn’t been as much focus on ecommerce in the past, but that is slowly changing as more businesses are starting to implement online stores and ways to purchase goods and services online.
‍
If I had more time, I’d test my designs again, and continue improving on the features that could help build trust with people in Japan while also helping them order and make payments online.